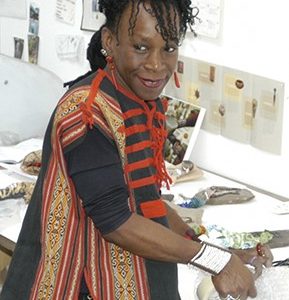 Sana Musasama received her BA from City College of New York, NY and her MFA from Alfred University. Musasama began traveling as a way to recover identity and cultural place. Clay was a geographical catalyst that brought her first to West Africa. She studied Mende pottery in Sierra Leone and ventured later to Japan, China, South America and Cambodia. She has continued her quest, expanding her interests to tribal adornment practices in various indigenous cultures. She is challenged by the concerns surrounding the safety of women, specifically the rituals involving rites of passage, female chastity and the “purification” of the female body. Musasama’s work is informed by history, women’s studies, culture and her travel journal.