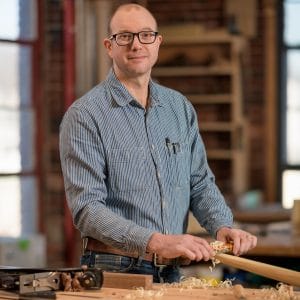 Owain Harris is a self-taught woodworker operating a one man studio in Gonic NH, where he builds custom furniture and cabinetry. He began his career in wood as a framing carpenter in 1997 and after several years working as both a finish carpenter and remodeler, he entered the shop full-time as a cabinetmaker in 2008. He is a juried member of both the League of NH Craftsmen and the New Hampshire Furniture Masters Association. His work has been featured in many publications such as Fine Woodworking and NH Home, and has received multiple awards, most recently in the Furniture category of the Veneer Tech Craftsman Challenge. Owain shares his passion for furniture making and design through writing and teaching, primarily as an instructor at the Center for Furniture Craftsmanship in Rockport Maine.