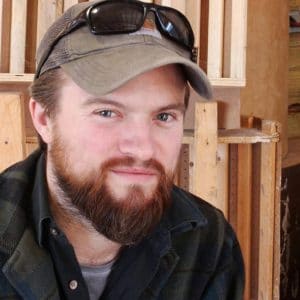 Jacob Brown is an Artist Blacksmith. Originally from California, at age fifteen, he started working as a welder/metal fabricator in Oakland, CA. Later, he attended The Oxbow School in Napa, CA, where he concentrated on sculpture. He then moved on to study at the School of The Art Institute of Chicago where he obtained a BFA. Following that, he completed his Blacksmithing apprenticeship at The National Ornamental Metal Museum in Memphis, TN. He traveled across the United States and internationally to study and work with different Smiths. He then became the studio head for Blacksmithing, Fine metals and Woodworking at Peters Valley. Mr. Brown now lives in Memphis, TN where he is the facilities manager for the Metal Museum. In his work, he tries to promote the rejuvenation of the relationship between the object, its maker, purpose, and audience in a contemporary manner while honoring its roots. This relationship, and responsibility is at the heart of his goal as a maker of things.