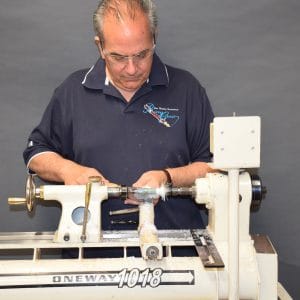 Barry Gross started creating his fine writing instruments over 20 years ago working with exotic woods. Since then he has moved to working with resins to create his one-of-a-kind fine writing instruments. In 2010 he won a Readers’ Choice Award from Pen World Magazine and has published over 70 articles for woodworking magazines as well as authoring six books on turning. In 2012 he was a double Niche Award finalist and was commissioned by the White House to make pens for foreign dignitaries by former Vice President Dick Cheney. In 2014 -2015 he was accepted as a member of Who’s Who for outstanding achievements in the field of woodturning. For the past 15 years he has been a featured demonstrator for The Woodworking Shows and has demonstrated for National and Regional AAW sponsored events.