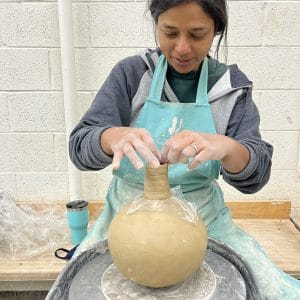 Following BFA and MFA degrees in painting from the MS University of Baroda in India, Antra Sinha began her pottery career as an apprentice to Ray Meeker at Golden Bridge Pottery (GBP) in Pondicherry, India. There she taught workshops, participated in kiln firings of monumental sculpture and production ware, and began to design and build kilns. An award from The Japan Foundation took her to the Shigaraki Ceramic Cultural Park in Japan where she completed a large-scale sculpture leading to a commission for the Hyatt Regency Hotel in Chennai, India. Her signature sculpture, Tetrarc, was one of six created for the pool deck area at the GBP studios. Antra then worked at The Tin Shed Pottery in Australia, followed by the studios Qdos and Gooseneck Pottery as assistant to Graeme Wilkie and Robert Barron, respectively. She participated in the firing of Barron’s 1000-cubic-foot Noborigama kiln. Following this, she was invited for a residency at the Gaya Ceramic Arts Center in Bali, Indonesia. In 2014 she travelled to Markus Bohm’s studio Muritz Keramik in Germany. In Guldagergaard, Denmark at the 2nd European Wood Fire Conference she gave a presentation of her work and participated in Steve Harrison’s unique, Laid Back Wood Firing at Markus Bohm’s studio. Antra was invited to continue exploring and researching in northern Europe at a residency at Zentrum fur Keramik in Berlin. She furthered her practice by building her own kiln design and opening her ceramic studio, Earth Art, in Pondicherry. She then received a STEM scholarship to pursue another MFA in ceramics at Utah State University in Logan, Utah. At the 50th NCECA conference she was awarded the MultiCultural Fellow. She has since received the Master’s Student Researcher of the Year Award at the Caine College of the Arts, USU, presented a paper at the ISCAEE conference and received the Nora Eccles Harrison Museum of Art Teaching Fellowship in Logan, UT. Currently, Antra holds the position of Gallery Coordinator and Art Instructor at the Caine College of the Arts, at Utah State University. 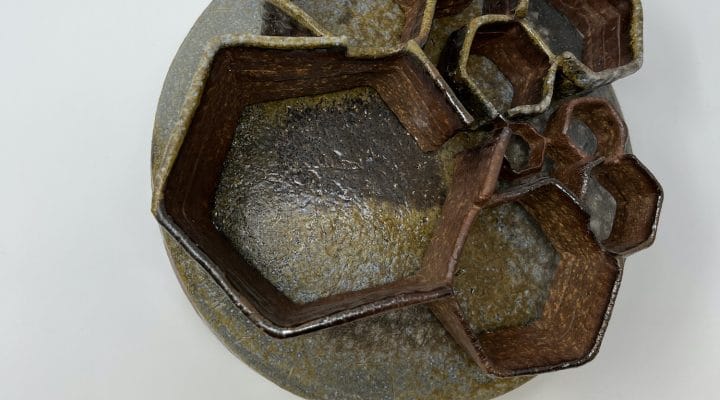 Sculptural Form in the Noborigama

During this workshop, you will fire the Ruggles + Rankin two-chamber wood kiln. Bring already bisque-fired pieces made with HIGH temperature stoneware or porcelain and on the first day learn […] 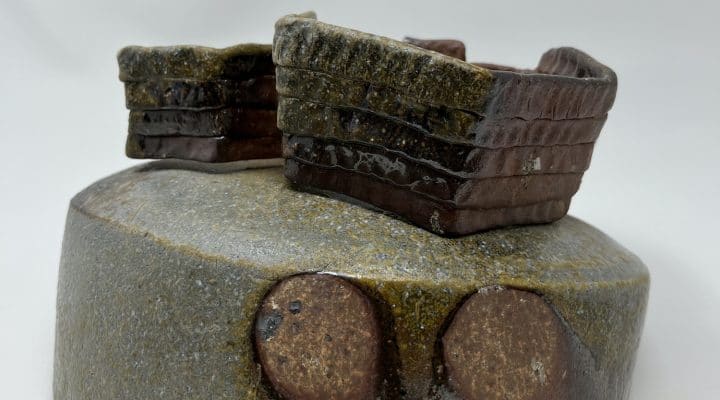 Making Forms to Get the Fire to Paint

Tuesday, April 5 ~ 7:00pm to 8:00pm EST What tools do you use for painting on pots? How about using fire itself! Let’s explore forms that create shapes which channelize […]